A poll shows reduced support for U.S. economic aid to Ukraine’s government, and Democratic Rep. Jamie Raskin is justifying the military campaign against nuclear-armed Russia as a war in defense of woke values.

“Moscow right now is … a world center of antifeminist, antigay, anti-trans hatred, as well as the homeland of replacement theory for export,” Raskin (D-MD) said in October 25 statement that was issued after 30 progressives withdrew their plea for peace talks. His letter said:

“Moscow right now is a hub of corrupt tyranny, censorship, authoritarian repression, police violence, propaganda, government lies and disinformation, and planning for war crimes … In supporting Ukraine, we are opposing these fascist views, and supporting the urgent principles of democratic pluralism. Ukraine is not perfect, of course, but its society is organized on the radically different principles of democracy and freedom …”

Russian dictator Vladimir Putin is an “imperialist” and a “colonizer,” Raskin said in his letter, which was released just two weeks before the Democrats are expected to lose in the midterm elections. 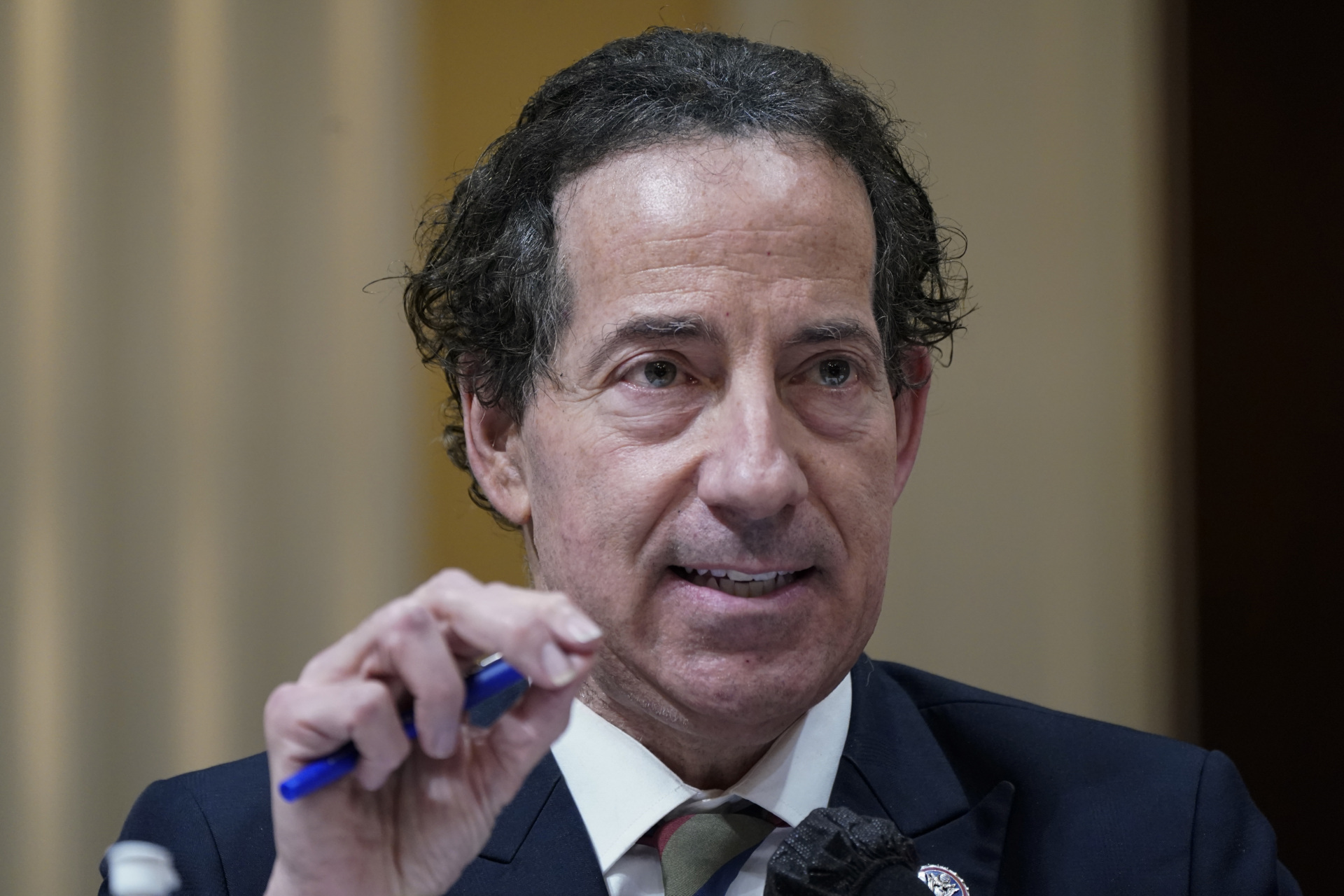 The October 25 poll asked: “What type of ongoing aid from the U.S. for Ukraine are you most likely to support?”

Just 40 percent supported a continued inflow of weaponry and money to Ukraine, according to the poll of 1,079 respondents by the Trafalgar Group. 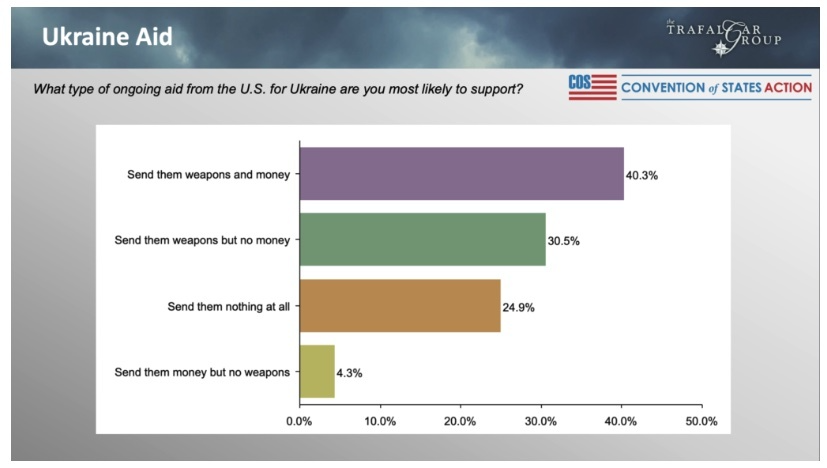 Thirty-one percent favor a continued transfer of weaponry — but not money — to Ukraine, whose economy and infrastructure have been wrecked by Russia’s guided weapons.

Other polls shows strong support for Ukraine, but weaker GOP support and much worry about nuclear weapons.

The Raskin statement justifies President Joe Biden’s strategy in the Ukraine war and also seeks to counter the rising worries among right-of-center advocates and the establishment’s foreign policy professionals. Other Biden supporters are pushing back about public worries. “They’re tactical nukes — they’re just bigger versions of what a conventional attack would be,” said Neil deGrasse Tyson, a Harvard-trained scientist and “science communicator.”

GOP leaders are also showing the first signs of a split.

“I think people are gonna be sitting in a recession and they’re not going to write a blank check to Ukraine,” GOP House leader Rep. Kevin McCarthy (R-CA), told Punchbowl News in an October 28 article. “Ukraine is important, but at the same time, it can’t be the only thing they do, and it can’t be a blank check.”

But establishment GOP advocates are also pushing back against the public’s concerns. The GOP leader in the Senate, Sen. Mitch McConnell (R-KY) issued a statement on October 21, saying:

“The Biden Administration and our allies need to do more to supply the tools Ukraine needs to thwart Russian aggression. It is obvious this must include additional air defenses, long-range [weapons], and humanitarian and economic support to help this war-torn country endure the coming winter.”

The Ukraine-Russia war began as a fight for territory on the east bank of the Dniepr river, where ethnic Russians comprise a majority of the mixed Ukrainian and Russian population.

After initial advances, many stalled Russian combat units are now being targeted and destroyed piece-by-piece by U.S. surveillance and U.S. weapons — such as the HIMARs launcher for satellite-guided rockets. The long-range weapons are guided by Americans but are triggered by Ukrainians.

In the weeks before the northeast defeat, Russian forces were struggling with surveillance and electronic warfare. They were using off-the-shelf drones flown by barely trained soldiers, documents show https://t.co/29X5bxowID via @specialreports @saitomri pic.twitter.com/tkGZ2i8XHl

The gradual destruction of the Russian forces is prompting Russian officials to suggest they may use nuclear weapons to avoid a defeat.

A growing number of establishment personalities are warning that the U.S. opposition to a compromise deal with Russia may push the Russians to escalate to the use of nuclear weapons.

However, U.S. officials have issued their counter-threats as they continue the joint destruction of Russian forces, which may have resulted in the death of 50,000 Russian soldiers. “I don’t think there is any such thing as [their] ability to easily use a nuclear weapon and not end up with Armageddon [for Russia and other countries],” Biden said on October 7.

U.S. officials have consistently refused to push Ukraine towards a negotiated deal, and have instead announced that Ukraine will set the terms of a peace deal. “Nothing about Ukraine without Ukraine,” Biden said on June 3. “It’s their territory. I’m not going to tell them what they should and shouldn’t do.”

Raskin’s statement also escalates the conflict to a worldwide war of all against “autocracy”:

“Ukrainians today give the democratic world a chance for a critical and historic victory, and we must rally to their side. It is important to be on the right side of a just war, and it is even more important to be on the right side and win. Just as Ukrainian resistance gives us hope, a Ukrainian victory would give us an opening to a much better future for all humanity …”

“All champions of democracy over autocracy–whether they call themselves progressives, conservatives or liberals–should be doing whatever we can to ensure that Ukraine wins this just war as quickly as possible.”

The peninsula was captured in 1783 by Russia’s Catherine the Great from the Turks — 62 years before the United States annexed Texas from Mexico.

House Speaker Nancy Pelosi (D-CA) also spoke at the October 26 event, reinforcing prior U.S. declarations for the Ukrainian claim over Crimea. “Crimea is Ukraine,” she said.

Nancy Pelosi just appeared at a "parliamentary summit" dedicated to the Crimea issue and declared unwavering support on behalf of the US Congress for the Ukraine government's plan to mount a US-backed military offensive in Crimea pic.twitter.com/vGukmoGrSR

In a short history of the region prepared for the conference, the Ukraine group does not even try to argue the Crimea was ever populated by Ukrainians.

“The peninsula was part of Russia for a relatively short time period. Crimea was part of the Russian Empire from 1783 until 1917 … [and] from 1921 until 1954 [under the Soviet Union] … The Russians became the ethnic majority as a result of repressions, persecutions and deportation of Crimea’s indigenous people.”

Instead, the statement argues that the Ukrainian nation deserves control of the Russian-populated area because it helps non-Ukrainian ethnic Tatars move back to the Crimea: “the country that took upon itself the key role in accommodating the Crimean Tatar repatriates and assisting them in settling down was an independent Ukraine.”

The statement did not say that Ukraine would protect the Russian population in the Crimea if the peninsula is placed under the control of Ukraine.

Peace talks are being supported by many establishment players, including Admiral Mike Mullen, a former chief of staff at the Pentagon. “The sooner the better as far as I’m concerned,” he told ABC News.