Authoritarian socialist Jacinda Ardern announced on Thursday she would step down from the prime ministership of New Zealand next month — a position she acquired in a controversial election and used to make the country crueler, less safe, and less free.

Ardern has served as prime minister of the country since 2017, a term set to end on February 7. She will remain a member of the New Zealand parliament through at least April. Parliamentary elections will be held on October 14, presumably marking a formal end to her political career, unless she changes her mind about running for re-election.

In her departing remarks, Ardern depicted herself as a victim of burnout, stating, “I just don’t have enough in the tank for another four years.” She noted she wanted time to “finally” marry her fianc? and spend more time with family, giving the impression that her collapsing approval rating and her Labour Party’s growing unpopularity did not play a role in the decision, one final dishonest message to the public. 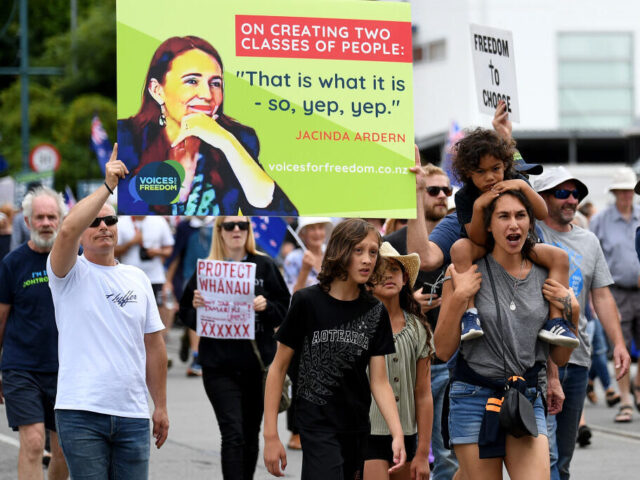 Members of the public take part in a protest organized by the Freedom and Rights Coalition in Christchurch, New Zealand, on February 19, 2022, demanding an end to Chinese coronavirus restrictions and mandatory vaccination. (Sanka Vidanagama/NurPhoto via Getty Images)

In reality, Ardern leaves her job as a blight on the face of the free world, a community which New Zealand seemed barely to belong to after nearly six years of Ardern’s iron-fisted rule.

Many Americans likely first became aware of Ardern during the 2020 presidential campaign, when, seemingly out of nowhere, multiple Democrat candidates celebrated the radical socialist as a role model. Current Secretary of Transportation Pete Buttigieg proclaimed in 2019 that Ardern’s leadership was “masterful.” Outsider candidate Marianne Williamson promised that Ardern would be the first world leader she would call if elected.

“Girl, you are so on,” Williamson gushed.

At the time, the Chinese coronavirus pandemic had not yet come to define Ardern’s tenure, and she had yet to break the law by banning New Zealanders from their own country. Ardern earned the left’s praise by making gun confiscation and “climate change” her priorities, outlawing a wide variety of firearms in 2019 following the Christchurch mosque shootings.

“This is just the beginning of the work we need to do,” Ardern said in March 2019 following the shooting, announcing a ban on semiautomatic weapons. Ardern followed the ban with an aggressive “buyback” scheme to convince New Zealanders to give up the weapons for cash that began the Democrat Party’s love affair with her administration.

Police outside of Auckland arrested two men who were trying to sneak into the New Zealand city with a trunk-full of Kentucky Fried Chicken. https://t.co/iJfwbVv7Yc

By far the cruelest, and most unlawful, coronavirus measure Arden took was the creation of Managed Isolation and Quarantine (MIQ). Ardern banned all people, including New Zealand citizens, from entering the country outside of the MIQ system. MIQ was available only to New Zealand citizens — later, only to the vaccinated — and operated like a lottery.

The most harrowing MIQ story known publicly is that of New Zealand journalist Charlotte Bellis, who was stuck in Afghanistan and pregnant out of wedlock under Taliban rule. Bellis attempted to seek aid to return to her own country to no avail and, desperate, traveled to Belgium, hoping New Zealand would take her in from there. She failed repeatedly to “win” the MIQ lottery until her time in the European country expired, and she was saved from a violent fate in Afghanistan only by the Taliban who, desperate for public relations victories in early 2022, granted her safe haven. The Taliban treated Bellis with more compassion than Ardern, the journalist would later write:

I organized a meeting with senior Taliban contacts, “you know how I am dating Jim from The New York Times, but we’re not married, right?” “Yes, yes we respect you both and you are foreigners, that is up to you.” I nervously continued. “Well, I am pregnant and I can’t get back into New Zealand. If I come to Kabul, will we have a problem?” One translated for the other and they smiled. “No we’re happy for you, you can come and you won’t have a problem. Just tell people you’re married and if it escalates, call us. Don’t worry. Everything will be fine.”

“MIQ has set aside hundreds of emergency rooms for evacuating Afghan citizens, and I was told maybe, as a tax-paying, rates-paying New Zealander, I can get home on their allotment. Is this the Hunger Games?” an outraged Bellis wrote.

Bellis successfully made it to her home country after the spectacle of her journey became a public embarrassment for Ardern, and the journalist delivered a healthy baby girl in June. The High Court of Wellington ruled that MIQ was an illegal violation of citizens’ rights in April.

“[T]he combination of the virtual lobby and the narrow emergency criteria operated in a way that meant New Zealanders’ right to enter their country could be infringed in some instances in a manner that was not demonstrably justified in a free and democratic society,” Justice Jillian Mallon wrote.

New Zealanders not stuck abroad were denied their right to a free and fair election, long before Bellis’s MIQ saga last year. The prime minister manipulated the Chinese coronavirus pandemic to silence dissent, postponing the 2020 election and essentially making it impossible for her opponents to campaign. She coasted to victory that year in an election which, according to New Zealand political observers, she was losing popularity in and should have struggled to win. Afterwards, authorities documented multiple instances of suspected voter fraud, but they did not change the outcome of the election. The re-elected Ardern then used her powers to enact lockdown protocols that New Zealand courts later deemed illegal.

Contrary to American and European media reports depicting Ardern as universally popular, thousands of New Zealanders took the streets for months in protest of her draconian lockdown measures. The largest groundswell of protests overran Wellington beginning in November 2022, surrounding the parliament and expressing opposition to vaccine mandates, lockdowns and all coronavirus-related authoritarianism. Initial protests resulted in no arrests or violence.

The protests swelled as 2022 began, however, apparently inspired by the trucker “Freedom Convoy” protests in Canada. New Zealand truckers organized to surround Wellington in February. Protesters on foot surrounded the parliament again; Ardern refused to meet with them because she was “too busy.” 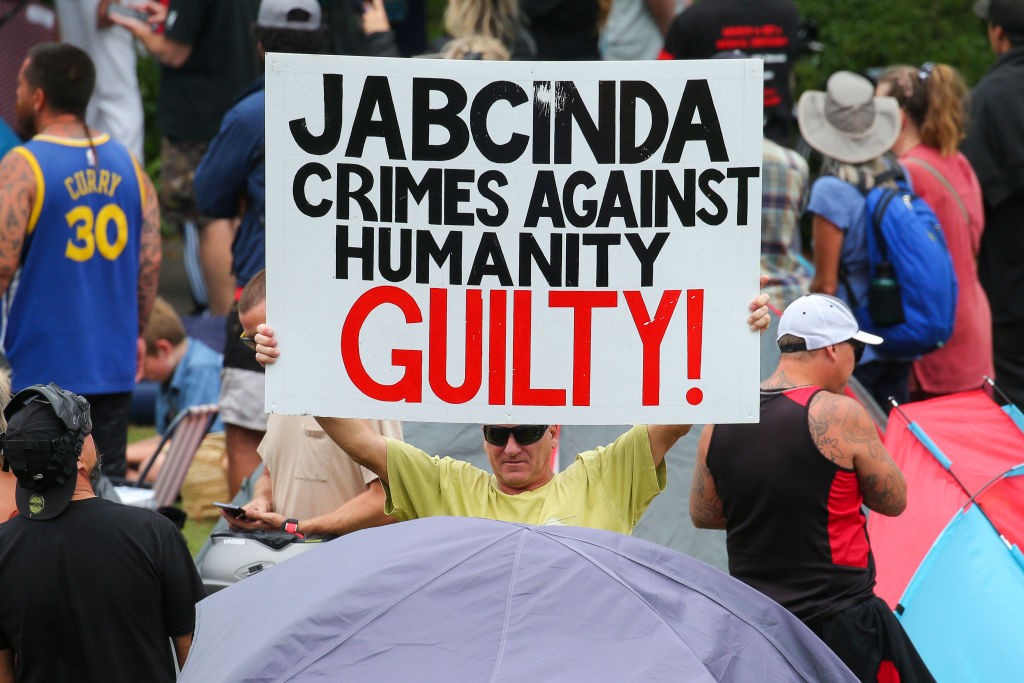 A protester holds a sign during a protest at Parliament on February 10, 2022, in Wellington, New Zealand, against coronavirus mandates. (Hagen Hopkins/Getty Images) 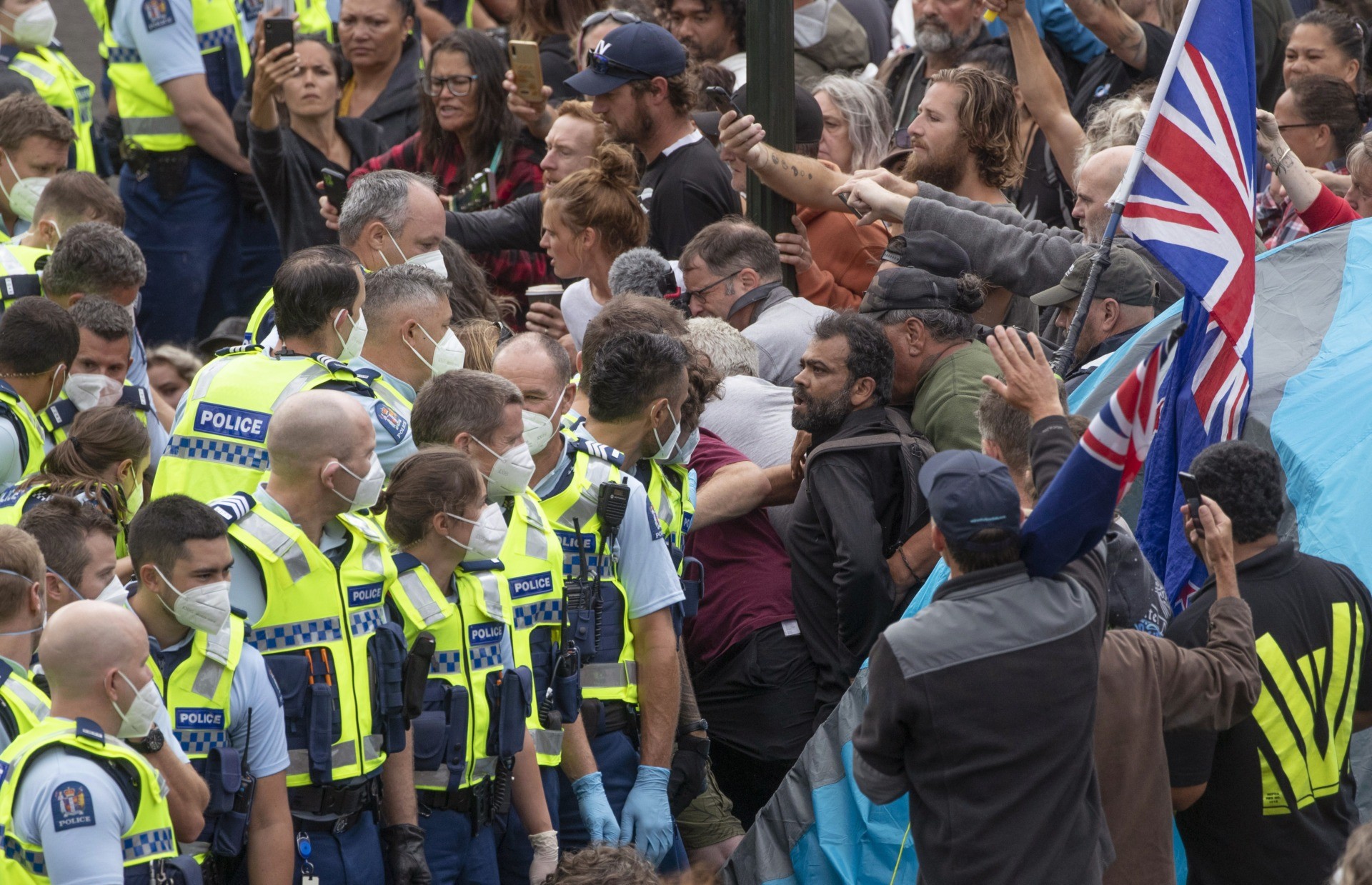 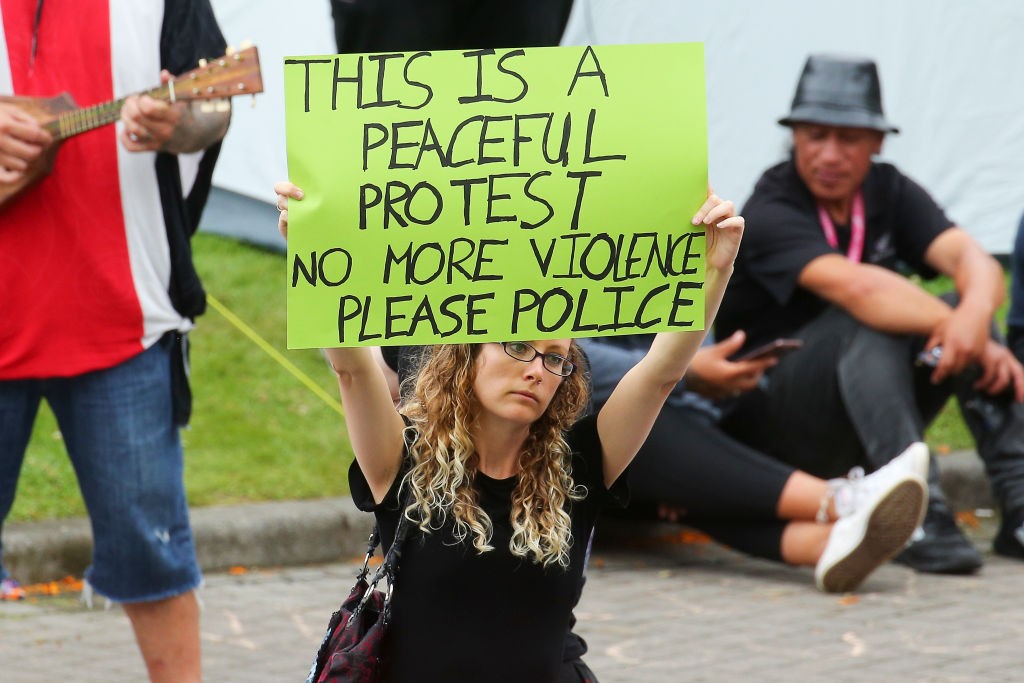 A protestor holds a sign during a demonstration at Parliament on February 11, 2022, in Wellington, New Zealand, against coronavirus mandates. (Hagen Hopkins/Getty Images) 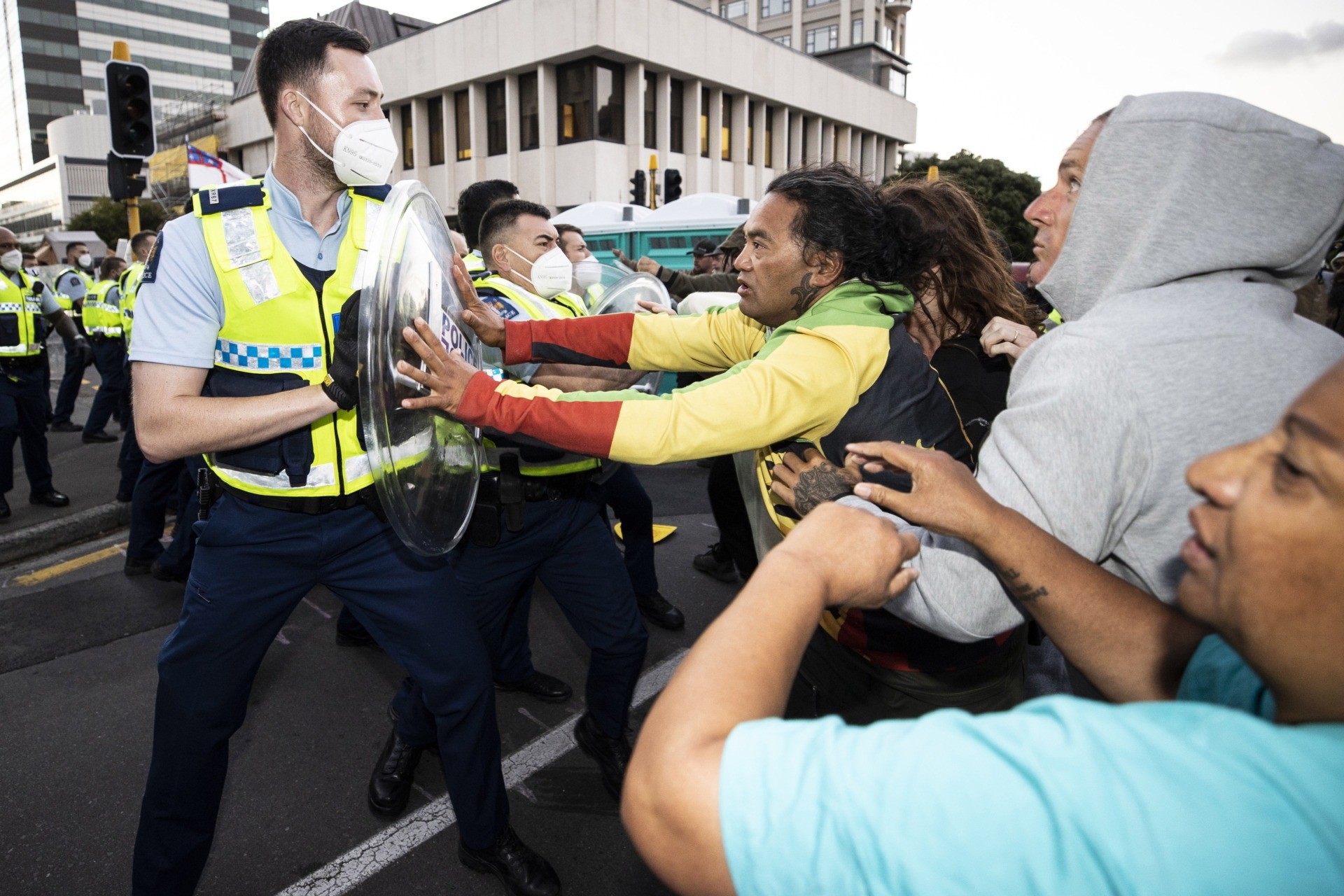 Police and protesters clash in Wellington, New Zealand, on Feb. 22, 2022, as police tightened a cordon around a convoy that has been camped outside Parliament for two weeks protesting coronavirus mandates and restrictions. (George Heard/New Zealand Herald via AP)

By the end of the month, Ardern’s government was threatening to use the military against the protesters — police initially refused orders to forcibly remove them, though an attempt to disperse them with ’80s music failed. In March, Ardern’s law enforcement officials attacked the protesters with water cannons, triggering violence. The protests subsided, then returned in August, and ultimately diminished as Ardern’s lockdown regime ebbed. 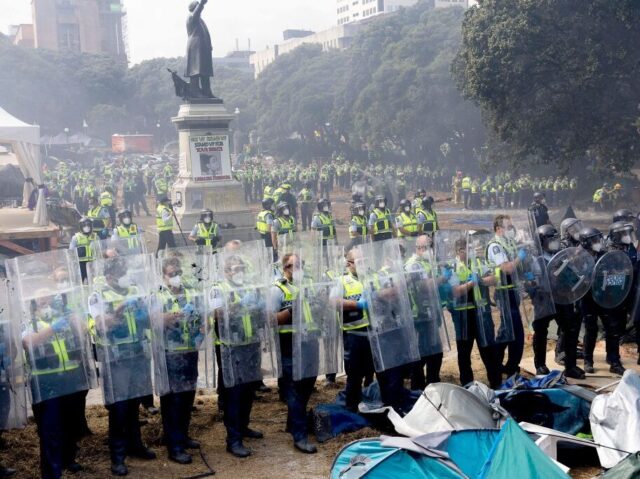 Police move in to clear protesters from Parliament grounds in Wellington, New Zealand, on March 2, 2022, on day 23 of demonstrations against coronavirus mandates and restrictions. (Marty MELVILLE/AFP/Getty Images) 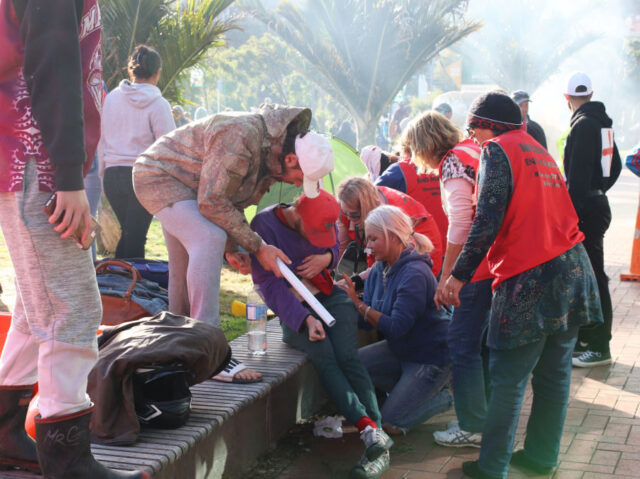 Outside of her country, Ardern’s signature foreign policy achievements were bringing New Zealand in lockstep with the genocidal Chinese Communist Party and promoting censorship against government designated “disinformation.”

When the Australian government found itself increasingly at odds with China, Ardern’s government seemed eager to appease the communist regime in Beijing over New Zealand’s historic ally.

“I can’t speak for Australia and the way it runs its diplomatic relationships, but clearly if they were to follow us and show respect, I guess a little more diplomacy from time to time and be cautious with wording, then they too could hopefully be in a similar situation,” New Zealand Trade Minister Damien O’Connor said in early 2021, referring to then-growing tensions between Australia and China.

Last month, Ardern expressed hope she could soon visit China herself for a “trade mission.” 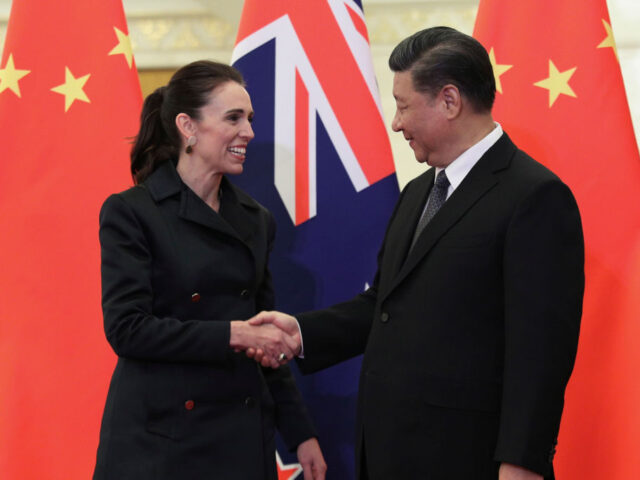 Her loudest call to silence “disinformation” occurred at the United Nations last year, where she compared views she deemed incorrect to firearms — which she has already moved to ban — and military-grade weapons.

“But what if that lie, told repeatedly, and across many platforms, prompts, inspires, or motivates others to take up arms?” she asked. “This is no longer a hypothetical. The weapons of war have changed, they are upon us and require the same level of action and activity that we put into the weapons of old.”

Her last notable act before her resignation announcement was to call an opposition party leader an “arrogant prick” during Parliament question time.