The U.S. Court of Appeals for the Fifth Circuit handed down a 13-3 decision Friday striking down the regulatory gun control that banned bump stocks under former President Donald Trump.

Reuters reported that the court intimated that actions on guns should be taken by Congress rather than the executive branch.

Circuit Judge Jennifer Walker Elrod wrote the majority opinion for the Fifth Circuit and also opined that the framers of the bump stock ban did not provide “fair warning that possession of a non-mechanical bump stock is a crime.”

On December 18, 2018, Breitbart News reported that the ATF finalized the language of its bump stock ban and gave people 90 days to hand the firearm accessories over.

Breitbart News possessed a copy of the DOJ’s summary of the ban at the time, and it stated:

The Department of Justice is amending the regulations of the Bureau of Alcohol, Tobacco, Firearms, and Explosives (ATF) to clarify that bump-stock-type devices-meaning “bump fire” stocks, slide-fire devices, and devices with certain similar characteristics-are “machineguns” as defined by the National Firearms Act of 1934 and the Gun Control Act of 1968 because such devices allow a shooter of a semiautomatic firearm to initiate a continuous firing cycle with a single pull of the trigger. 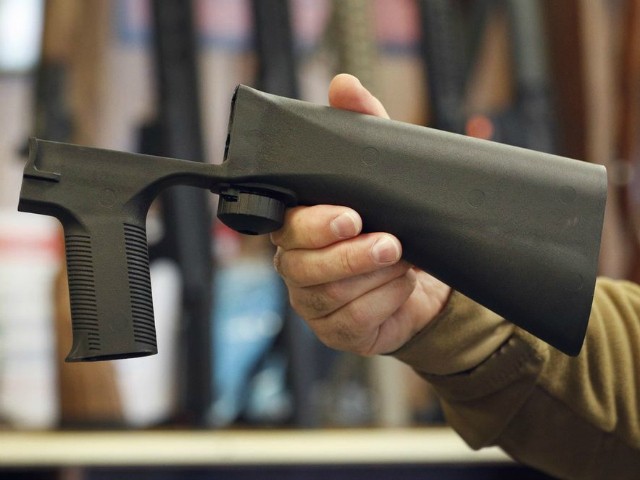 A bump stock device that fits on a semi-automatic rifle to increase the firing speed at a gun store on October 5, 2017, in Salt Lake City, Utah. (Photo by George Frey/Getty Images)

WGRZ noted that the Fifth Circuit, on January 6, 2022, pointed out that the presence of a bump stock does not make a firearm meet the definition of a machine gun as the trigger continues to be pulled and reset even with a bump stock affixed to a semiautomatic firearm.

Judge Elrod noted, “A plain reading of the statutory language, paired with close consideration of the mechanics of a semi-automatic firearm, reveals that a bump stock is excluded from the technical definition of ‘machinegun’ set forth in the Gun Control Act and National Firearms Act.”

AWR Hawkins is an award-winning Second Amendment columnist for Breitbart News and the writer/curator of Down Range with AWR Hawkins, a weekly newsletter focused on all things Second Amendment, also for Breitbart News. He is the political analyst for Armed American Radio and a Turning Point USA Ambassador. AWR Hawkins holds a PhD in Military History, with a focus on the Vietnam War (brown water navy), U.S. Navy since Inception, the Civil War, and Early Modern Europe. Follow him on Instagram: @awr_hawkins. You can sign up to get Down Range at breitbart.com/downrange. Reach him directly at awrhawkins@breitbart.com.