“I like him,” Trump said of McCarthy, before teeing off on those working against him such as Reps. Matt Gaetz (R-FL), Andy Biggs (R-AZ), Matt Rosendale (R-MT), Bob Good (R-VA), and Ralph Norman (R-SC). While Trump did not name those trying to stop McCarthy from taking the Speaker’s gavel on January 3, he in no uncertain terms said he disagrees with their efforts–and warned that there could be serious consequences if McCarthy does not get the gavel and they could make Washington worse for conservatives.

Trump’s interview came Friday morning here at his Doral golf resort in Miami and covered a broad range of topics including the Speakership race and much more.

Trump warned that when conservatives took out now-former House Speaker John Boehner in 2015, they ended with now-former Speaker Paul Ryan–who he said was much worse–in the process. 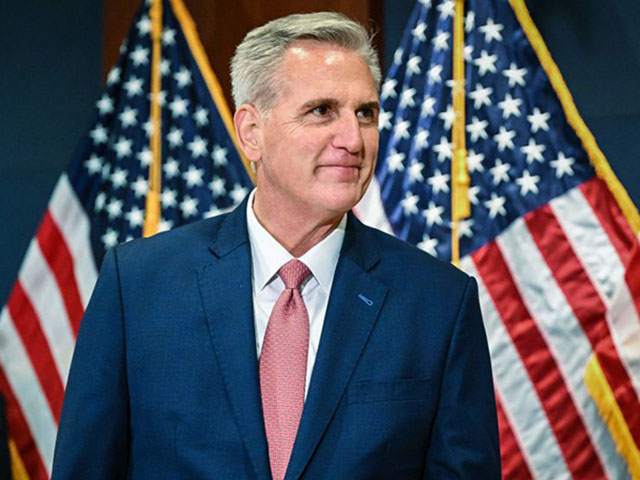 House Minority Leader Kevin McCarthy (R-CA) walks to the podium to speak after he was nominated to be Speaker of the House at the U.S. Capitol in Washington, DC, on November 15, 2022. (MANDEL NGAN/AFP via Getty Images)

“I think it’s a very dangerous game that’s being played,” Trump said. “It’s a very dangerous game. Some bad things could happen. Look, we had Boehner and he was a strange person but we ended up with Paul Ryan who was ten times worse. Paul Ryan was an incompetent speaker. I think he goes down as the worst speaker in history. We took [out] Boehner–and a group of people, some of whom are the same, and they’re very good friends of mine. All those people are very good friends of mine.” 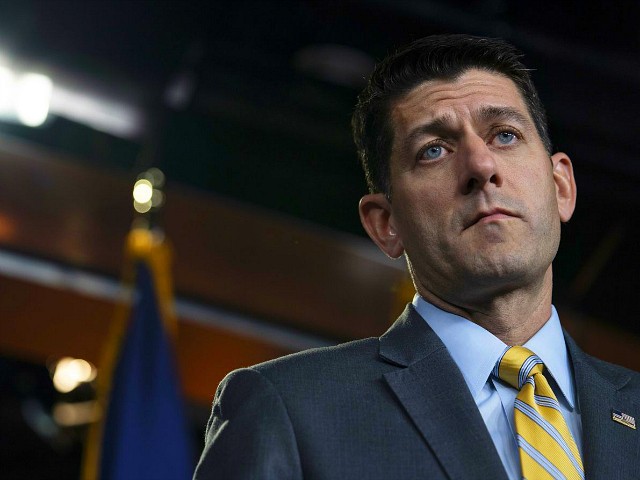 Trump also expanded on the point of just how bad Ryan was for the party, saying Boehner was like a historic world leader in comparison, and now Republicans have to “live with this maniac” Ryan, who he said is hurting Fox News and the New York Post from his position on the board at the Fox Corporation.

“Think of it–we ended up with Paul Ryan. Boehner was like Winston Churchill compared to Paul Ryan,” Trump said. “Boehner wasn’t perfect–nobody’s perfect–but Paul Ryan was a disaster for the Republican Party. That’s what we got. Now we have to live with him. He’s destroying Fox and he’s destroying the New York Post. We got to live with this maniac. This guy, Paul Ryan, couldn’t have gotten elected in his own area of Wisconsin. I went with him after I won the election and we had a tremendous crowd of people and they booed him off the stage. You remember that? They booed him off the stage. This guy is now telling Fox what to do.”

Asked if this all means he backs McCarthy in the race, Trump said, “Yeah, I support McCarthy.”

“Everybody wants my support,” Trump said. “I was 99 percent on endorsements [in the primary]. I don’t know the percentage but I was 233 and 22 on general election. Everybody would say that ‘yeah for the nomination he’s incredible but for the general election…’ But what’s that percentage? 233 and 22–it’s incredible. They always want my endorsement.”

Then Trump further explained why he believes McCarthy deserves the gavel.

Trump also noted, again without naming them specifically, that he is “friendly” with many of the people working against McCarthy–but warned them to knock it off or they could make things worse. Trump even referenced the concerns, as a recent Breitbart News article reported, warning of a “doomsday scenario” where Democrats might partner with an establishment Republican, if McCarthy goes down, to hand that establishment figure the Speakership. In exchange for Democrat votes, the concern is that such a Republican might agree to a House rules change, weakening or altogether scrapping subpoena power.

“Now, I’m friendly with a lot of those people who are against Kevin. I think almost every one of them are very much inclined toward Trump, and me toward them. But I have to tell them, and I have told them, you’re playing a very dangerous game,” Trump said. “You could end up with the worse situation. I don’t even want to say what it is, but I could tell you it’s a worse situation. You could end up with some very bad situations. I use the Boehner to Paul Ryan example. You understand what I’m saying? It could be a doomsday scenario. It could be. You could end up with somebody who would be a disaster like Paul Ryan was.”