On Monday morning, we wrote about encouraging developments in our own hemisphere for the spread of constitutional freedoms, as Chilean citizens sent an unequivocal message Sunday to communist President Gabriel Boric by rejecting proposed changes to the country’s constitution. This movement appeared to cause no small amount of heartburn among American progressives like Sen. Bernie Sanders and their legacy media allies at the New York Times, as my colleague Bonchie explained:

The New York Times put out multiple headlines decrying the failure of the “left-leaning” constitution that would have guaranteed “rights” like universal healthcare and abortion.

Tuesday saw more of the same, with Boric pulling many of the far leftist cabinet members he had placed and replacing them with moderates, according to the Wall Street Journal:

Chilean President Gabriel Boric appointed more centrist cabinet ministers after voters overwhelmingly rejected a new constitution that would have constrained the country’s market-based economy and led to other changes long sought by his political base https://t.co/MWd4CDmxMU

Chilean President Gabriel Boric appointed more centrist cabinet ministers Tuesday after voters overwhelmingly rejected a new constitution that would have constrained the country’s market-based economy and led to other changes long sought by his political base.

With students angry about the outcome of the referendum on the constitution demonstrating near the doorstep of the presidential palace, Mr. Boric gave a speech in which he said that replacing the cabinet was imperative to reflecting the message that Chilean voters delivered Sunday.

“Changing the cabinet is always dramatic, and this change hasn’t lacked its dose of drama,” Mr. Boric said in a speech. “It has to hurt, and it hurts. But it’s necessary.”

The new report disclosed additional details on the proposed constitutional overhaul, which the voter rejected by 62%, including that it “would have expanded the rights of indigenous people, enshrined abortion rights and guaranteed rights to housing, education, pensions and many other services. Some constitutional analysts said the draft charter would have undermined the balance of power, weakened the independence of the judiciary and scaled back equality for all citizens under the law.” 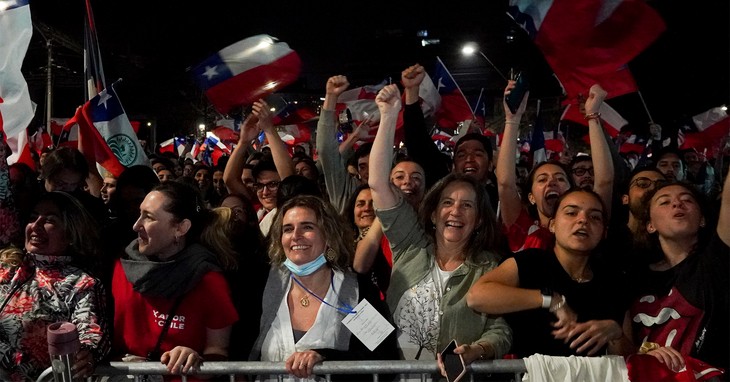 Sounds familiar, right? We now have an accounting of which cabinet members were replaced, or in one case, shuffled to a less prominent role.

Boric named Carolina Toha, an experienced centrist politician who served as mayor of Santiago and as a minister under former President Michelle Bachelet, to replace Izkia Siches as interior minister.

Siches, a doctor by trade who gained popularity during the pandemic, faced a number of controversies since taking office.

Giorgio Jackson, a former student protest leader alongside Boric, will be replaced by Ana Lya Uriarte as minister secretary-general of the presidency.

Jackson will stay in the cabinet and was named minister of social development.

The president also announced replacements for the health minister, energy minister and others.

The WSJ also spoke with political analyst Mauricio Morales on one other reason the “cabinet shake-up” happened — the president’s popularity dropped more than 10 percent since his election in March:

Mauricio Morales, director of the Center for Political Analysis at the University of Talca, said that the cabinet shake-up provides oxygen for Mr. Boric, whose popularity fell to 39% in an August poll by Cadem from 50% when he took office.

“He gave greater influence to the centrist parties of his coalition” said Mr. Morales