Former President Donald Trump responded to a photo of allegedly classified documents released by government prosecutors in a court filing Tuesday evening related to the FBI’s investigation into documents at Mar-a-Lago, saying that they were declassified.

“Terrible the way the FBI, during the Raid of Mar-a-Lago, threw documents haphazardly all over the floor (perhaps pretending it was me that did it!), and then started taking pictures of them for the public to see. Thought they wanted them kept Secret? Lucky I Declassified!” Trump posted on Truth Social. 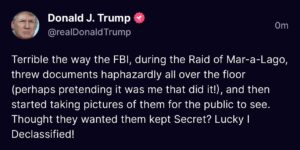 The FBI raided Trump’s Florida residence in August in search of classified materials, after the National Archives and Records Administration (NARA) told the Justice Department that some material Trump had sent to them in January 2022 contained “a lot of classified records” and the FBI suspected there were more.

Former Trump administration official Kash Patel told news media, including Breitbart News, in May 2022 that documents handed over to NARA may have been marked as “classified,” but were already declassified by Trump.

Patel clarified in a recent interview with Breitbart News that he was referring to documents that had been given to NARA in January, and that he did not know what documents were found in the Mar-a-Lago raid in August. 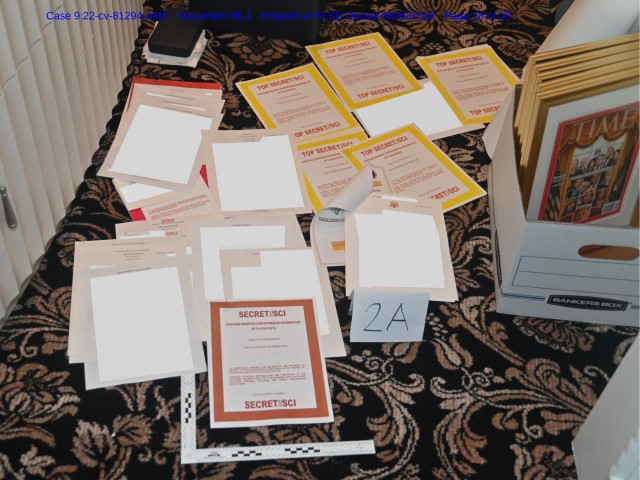 During the May interview with Breitbart News, Patel said the documents sent to NARA in January included “…information that Trump felt spoke to matters regarding everything from Russiagate to the Ukraine impeachment fiasco to major national security matters of great public importance — anything the president felt the American people had a right to know is in there and more.”

“The same Russiagate people who started that investigation are now running DOJ and are the same FBI guys at counterintelligence running this investigation. They all know the information we discovered — Devin and I — during Russiagate. And they all know what didn’t get out as a result of that big binder of stuff not ever being released by Trump,” he said.

“The same people that were supposed to have committed Russiagate are now back in charge, and they know that if they go in and raid Trump’s house and say we have an ongoing counterintelligence investigation, that the documents will never be released,” he said. “They’re afraid of more of their corruption being exposed, more of their unlawful conduct. What happens when the rest comes out?”