Giffords posted a tweet Sunday, which said, “The shooters in at least 5 mass shootings have stockpiled guns & ammo using credit cards and killed 145 people. Visa, Mastercard, and American Express have the power to flag suspicious purchases and save lives. Call on them to act.”

The tweet linked to a campaign by another gun control group called GunsDownAmerica.

The GunsDownAmerica campaign says, “Between 2007 and 2020, the killers in at least five major mass shootings used credit cards to finance their deadly rampages. These individuals exploited the banking system to purchase large quantities of firearms and ammunition — and the financial industry has the power to stop them.” 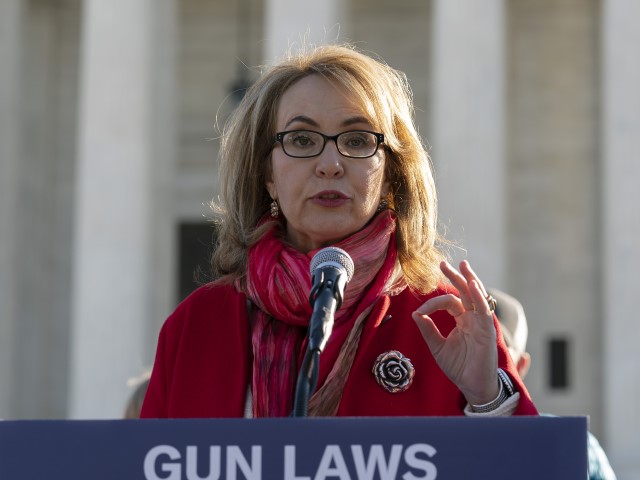 In some of the examples cited by GunsDownAmerica, the attackers purchased their guns and ammunition over a 12-month timeframe, rather than in a matter of weeks or days.

The shooters in at least 5 mass shootings have stockpiled guns & ammo using credit cards and killed 145 people.@Visa, @Mastercard, @americanexpress have the power to flag suspicious purchases and save lives. Call on them to act. https://t.co/7FpUwLOCgV

GunsDownAmerica wants major credit card companies to stop categorizing firearm and firearm-related purchases as “sporting goods,” creating a new category into which gun and ammo purchases can be scrutinized.

A similar campaign was run by gun controllers in 2018, as they sought to pressure credit card companies into cutting ties with semi-automatic rifle makers.

On March 9, 2018, Breitbart News reported that Visa refused to succumb to the pressure, noting that it is not the credit card company’s job to “[set] restrictions on the sale of lawful goods and services.”

AWR Hawkins is an award-winning Second Amendment columnist for Breitbart News and the writer/curator of Down Range with AWR Hawkins, a weekly newsletter focused on all things Second Amendment, also for Breitbart News. He is the political analyst for Armed American Radio and a Turning Point USA Ambassador. Follow him on Instagram: @awr_hawkins. Reach him at awrhawkins@breitbart.com. You can sign up to get Down Range at breitbart.com/downrange.